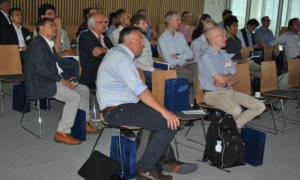 On Wednesday May 30th 2018 the NAG organised (in combination with the DGTA) its sixth Aero Engine Round Table, this time held at the new facilities of NLR at Marknesse. The theme of electrification in propulsion led to an oversubscription in the number of attendees and served as an illustration for the need for new technologies to meet the ACARE 2050 environmental goals. 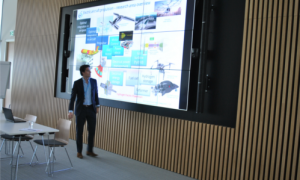 Following the welcome by Martin Nagelsmit of NLR,
René van Doorn provided an overview of the key areas for future innovation as viewed by Rolls-Royce in relation to optimising the current gas turbine, an increased integration between airframe and engine, and Rolls-Royce’s efforts in developing turbo electric and hybrid electric concepts. Martin Nagelsmit highlighted the various studies NLR is involved in nationally as well as internationally focused on electrification in flight. GKN-Fokker’s Simon Taylor provided a more technical overview of the current challenges facing electrification of propulsion and the need for further research. GKN and NLR described the results of their preliminary research in a centreline propulsor demonstrator and invited attendees to make their interest known in case Dutch industry wants to participate in phase 2.

The ensuing round table discussion led to the conclusion that given the current pace of battery development, full electric propulsion is possible for small size, light weight aircraft, but that some form of (partial) turbo electric propulsion in combination with boundary layer ingestion will be needed to make electrification of propulsion possible for medium size, regional type of aircraft to allow for sufficient weight transport and distance to be covered for commercial operations.

The meeting ended with a tour through the DNW wind tunnel facilities and a networking session thus allowing for a more one-on-one sharing of opinions, experiences and business cards.