The Dutch well represented at the Farnborough International Airshow!

From Monday 11 until Sunday 17 July the Farnborough International Airshow (FIA) took place in Farnborough, the United Kingdom. Once again the NAG was represented at the most important Airshow for 2016 with 20 Dutch companies at the Holland Pavilion. The following companies were promoted at FIA:

The Holland Lounge, as part of the Holland Pavilion, was expanded even more thanks of a subsidy from Holland High Tech. Besides a bigger lounge, the NAG developed an info graphic, several Dutch give-aways, and a typical Dutch ‘stroopwafelbakker’ was on site. Al these extras created a very positive vibe at the stand and many visitors and relations visited the pavilion. After a strange start on Monday, all show participants were evacuated due to heavy rain. Most FIA exhibitors had a very interesting B2B week with several events planned at the Pavilion such like as:

– Holland Reception organized in cooperation with the Dutch Embassy in London. Ms Margriet Leemhuis, Deputy Ambassador of the Kingdom of the Netherlands in London, welcomed everyone to England and gave a very nice motivating speech.

– Jasper Wesseling, Director of Innovation and Development from the Dutch Ministry of Economic Affairs, paid a visit to all the Dutch participants.

Furthermore, ADSE celebrated their 20th year anniversary, Pontus signed an MoU with PM Aerotec and Marshall Aerospace and many B2B meetings took place at the Happy Hour with typical Dutch delights such as herring and cheese.

On Wednesday night the official NAG diner took place at the Elvetham Hotel where members were able to network and relax after a busy Farnborough Airshow.

Besides activities at the Holland Pavilion the NAG also arranged a Meet & Greet for the Dutch industry at GKN/ Fokker Technologies at their chalet. The merger of GKN and Fokker created an excellent match make between NAG members and the supply chain management of GKN during the Farnborough Airshow last week. 30 participants from NAG made use of this opportunity to expand their network. The NAG is preparing a network mission to the UK later this year. It was agreed with GKN to include a visit to the Filton facilities during the mission.

Some reactions of the members:

“Very nice to connect with the key-individuals of various disciplines at one location. Experienced an open and down-to-earth mentality; a solid ground for establishing a healthy business relationship.”

“To Pontus joining the meeting had several benefits. We were able to tighten our co-operation with PM Aerotec by attending as a joint participation. But mostly, having an insight in GKN’s portfolio made us re-evaluate our prospective towards seeking co-operation with GKN and Fokker.”

The NAG will organize in two years’ time the Holland Pavilion at Farnborough to represent the Dutch industry again! 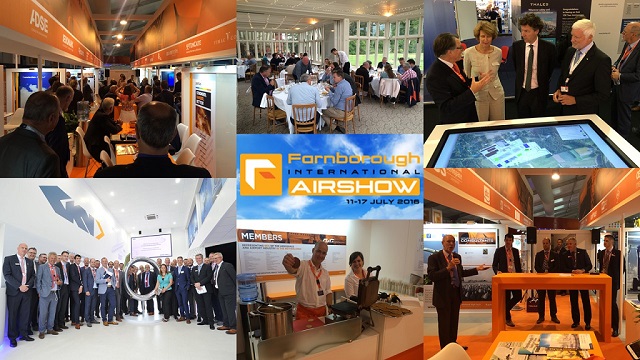